To get us all in the holiday mood, here is Christmas sequel to the successful video 'A Very European Break Up'. She is Germaine, he is Greco and they are going through a very rough time! Your aim is to spot as many references to the current Euro Crisis as you possibly can... (from the icing on the cupcake to everyone catching Greco's cold). Keep on looking because you will discover new ones each time!

Happy Christmas (or should I be more politically correct? Me? No!) to everyone! And a visual 2013, at least!
Posted by Virginia 4 comments:

The institution that should not make you yawn...

Of the many institutions and agencies of the European Union, there are a couple that have always stood out as the ones that nobody really knows much about, don't seem particularly useful, and still receive big budgets. I know it might be an unfair description, but I am not questioning whether they actually do something useful, I am only arguing that what is done is not perceived as useful that is not saying the same thing. But as 'perception is reality', the difference becomes slightly blurred. Anyway, all this long introduction to say that, just to mention two that popped into my mind, the Committee of the Regions and the European Economic and Social Committee clearly fall under this category.

Let's leave the Committee of Regions to one side for the moment (or maybe forever..).

The European Economic and Social Committee (EESC) is - as you all know, right? - 'a consultative body that gives representatives of Europe's socio-occupational interest groups, and others, a formal platform to express their points of views on EU issues. Its opinions are forwarded to the larger institutions - the Council, the Commission and the European Parliament. It thus has a key role to play in the Union's decision-making process'. I am not so sure about this last sentence actually, but if you look at its role - in this current anti-European climate - it seems an incredibly important body. It might have started as the liaison office between the Trade Unions, Employers Federations and the EU, but it has now a wider remit. It aspires to be the channel European citizens use to reach the larger institutions and the way for the EU to communicate and open a dialogue with European civil society. Is this not key at the moment? It is for me but, nonetheless, there isn't much talk about the initiatives the Committee is carrying out and the communication it does on such initiatives is not generating enough interest, if one excludes the people and the organisations that are directly linked to EESC projects. But, at least from a visual perspective, they are doing some pretty good things (yes, I did say it, so you see I am not always being negative?). A couple of examples.

This week the Committee has awarded the Civil Society prize, a prize that aims to 'reward excellence in civil society initiatives' in Europe; the three winners (from the UK, Portugal and Sweden) were captured in a video (6 minute-long) that described very well what the organisations do and hopefully can inspire others to start similar projects in their countries.

Here it is (and don't get put off by the still image of the EESC president!):

Another initiative that from my 'visual' angle is great is the Europe Past Forward video competition: amateur video producers are asked to send in a 2 minute video on what it means to be a citizen of the EU.

Here is the animated trailer for the 2013 submissions (56 seconds): original, good animations and, how can I put it, non-EU?

And finally, to give you an idea of the kind of videos that are sent in for the competition, here is the 2012 Belgian winner: simple, effective idea.

Are these not great ways to connect to European civil society? Maybe the theory is that the less power you have in the EU, the more creative you can be (discuss). Still, ten points for trying to be daring! Why then, when you mention the EESC (and of course if one uses the acronym it's even worse!), you get yawns in return?
Posted by Virginia No comments:

The EU and the Nobel Peace Prize: enough celebration?

Next Monday, a good number of European leaders and the heads of the three European institutions will be in Oslo the Nobel Peace Prize ceremony, awarded this year to the European Union. (Little parenthesis: the UK Prime Minister has made it very clear he does not want to go and will not go. Fine, but can someone please remind me - and them actually - why they joined in the first place?).
One might question the timing of such decision and, as for most Peace Prizes awarded in past years, agree or not with the reasons behind it. In this case, and not surprisingly, the debate has been tougher than usual. Just do a quick Google search and you will find a sea of comments of all types, well, really of all types?

And here is why I am talking about it: I was very happy with the decision. Not ideal perhaps in terms of timing - this year of all years?- but certainly I agreed with the motivation ("for over six decades the EU contributed to the advancement of peace and reconciliation, democracy and human rights in Europe"). But, by looking online, it looks like I am pretty much the only one - ok exaggeration for effect! But I did a search on YouTube (EU and Nobel Peace Prize) and the results were dire. A lot of news items from different TV channels, most of which had interviews with people deeply critical of the decision; individuals - and a lot of North Americans puzzlingly- just filming themselves arguing against it; videos with scenes of riots in Athens and Madrid coupled with Nazi Germany shots with the European anthem (Ode to Joy) as the soundtrack; videos proposing alternative winners and videos making fun of the Nobel Committee; do I need to go on? I wanted to put the link to some of these videos but frankly, some of them do not really deserve to have more views, so go and look for them yourself!

I remember seeing the remarks of Barroso, Van Rompuy and the European Parliament President Schultz when they first heard the news and it took me quite some time to find those clips again. But anyway, talking heads with quite predictable comments. Where could I find the EU really making something of this prize for its own image, history, reputation and future? I did not want to give up; and eventually on the EUTube channel (couldn't it come up with a regular YouTube search?), I found this video - produced by the European Council:

A good video; a bit too long maybe, but surely something that shows the intentions and real motives behind the European idea using the voices -  at times quite moving - of the main protagonists, starting with Winston Churchill (yes, a Brit!) and the people of today. This is what needs to be communicated and showed over and over again! 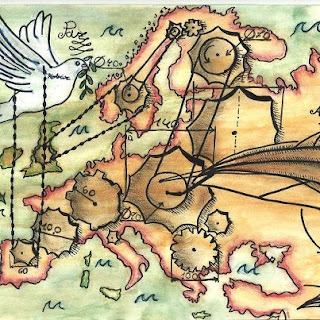 There is one more initiative that I think deserves to be mentioned in relation to the EU, the Nobel Peace Prize and good use of communication tools : the Youth Contest "Peace, Europe, Future", a drawing and writing contest for 8-24 year olds (answering the question: what does peace in Europe mean for you?) organised by the EU institutions, in partnership with the European Youth Forum. The four winners - three selected by a jury and the last by a Facebook vote- will be part of the official delegation travelling to Oslo - and probably more deservedly than some of the hundreds going! 5400 young Europeans have taken part. Has it been advertised in schools? Maybe there would have been more participants. Anyway, looking at what the winners - and not only them -  have written and drawn, the striking thing is how peace in Europe is considered yes, a given, but "like air", something you cannot see but can't live without either. Call me an idealist, but I am longing for this view to be shared by the majority of young people across Europe. And I do love the 'mechanical' drawing of the 12 year old winner!